60 Years of Pioneering Offshore Safety and Counting On…

Home/Newsroom/60 Years of Pioneering Offshore Safety and Counting On…

60 Years of Pioneering Offshore Safety and Counting On…

Corpus Christi, Texas— October, 2019 — President and CEO of Billy Pugh Company, Paul Liberato, is due to celebrate his 30 year anniversary as the President of BPC in October of 2019.

Pugh Co was established in 1957 in the infancy of the offshore oil and gas industry. Billy Pugh was a deckhand on a supply/crew boat working offshore Corpus Christi. Billy had been in the United States Coast Guard during World War II and had been working around water most of his life. During his hitch on a crew boat, Billy saw how the personnel were being transferred on and off the drilling platform and was concerned for their safety. The rig hands were being moved from the boat to rig using a cargo net. Billy said that the passengers would “hang on like monkeys” to the rigging of the cargo net and literally set down onto the deck of the boat or the drilling platform. When Billy brought this hazard up to the drilling superintendent- that this looked very dangerous and that he had a better idea; he was told to go back to work. A few days later a serious accident occurred taking the lives of a two of rig hands and seriously injuring another. The rig superintendent sent for “that deck hand” and asked him what his idea was. The “idea” was a cone shaped system that allowed personnel to ride on the outside while standing on a ring allowing them to lean slightly forward and more easily embark and disembark the transfer device. With this amazing new device….The Billy Pugh Co. was born.

Over the next several decades, Billy Pugh Co. became synonymous with the offshore oil and gas industry. One of the first rites of passage for a new rig hand was his first ride on the famous Billy Pugh Net. Also of interest during that time period (the early 1960’s) NASA approached Billy Pugh Co. to design and test a system for water recovery of astronauts. The Apollo moon missions would all use the Billy Pugh Co. X-872 Helicopter Rescue net to rescue the astronauts after the splash down of their capsule. The X-872 that was used on Apollo 11 has its own display at the Smithsonian Institute in Washington D.C. 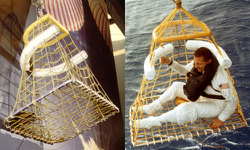 In the spring of 1989, Billy Pugh decided it was time to retire and sell his company. He had a local friend Jimmy Storm (who founded both Storm Drilling and Marine Drilling) that he told about his desire to sell the company. Mr. Storm contacted a family friend named Paul Liberato to see if Paul had interest in becoming President and owner of Billy Pugh Co. After some additional investors were located, the company was sold to Paul and the new investment group in October of 1989 was formed.

Soon after (1990) Paul brought Frank Liberato on to act as General Manager and run the day to day operations of the company. Frank has many talents including personnel management, product development especially the ability to turn ideas into workable products. In the next several years, many products were brought on line for Billy Pugh Co. developed by Paul and Frank. The offshore oil and gas industry is somewhat unique in its desire to create a safer work environment for the entire industry. The offshore industry seems to always be willing and anxious to help develop and share ideas for new concepts that will help everyone. This collaboration was responsible for new products like the OMB man basket, the WV0-workvest, the DTP pipe hook, the tangle resistant tag line, the rigid tag line and the DB-1 Derrick riding basket. All of these were and continue to be nice additions to our product line- but nothing changed the landscape of Billy Pugh Co. like the X-904 personnel transfer device.

In the mid-2000’s, it became apparent that it was time for a new personnel transfer device to supplant the industry standard, the X-871 personnel basket. For the next two years, prototypes were built and designed. Hundreds of personnel were asked to participate in focus groups to determine what the new device would look like and what safety features it should have.

When the fourth prototype was built (that’s where the “4” came in X-904) it was tested on a large semi-submersible. As with all of the prototype testing we did, we included surveys. We included one survey for riders and one for riggers and crane operators. We asked both groups to rate the X-904 from 1 to 5. In this test period, we had 100 surveys. They came back with 70 responses rating the new system a “5” and 30 responses rating it a “4”; there was nothing less on any survey under “4”.

From that point forward, we have had such great success with this fine product. It really “sells itself” and once the X-904 was in the field the word got out and sales of this great and innovative device really took off. The numbers we have sold has far exceeded any projections we made at the start of this program. The X-904 is now specified with most operators and contractors world-wide. We continue to strive to make the best quality safety products available and to continue to innovate. With the help of our customers, we will continue to listen more than we talk and work to do our part to create the safest work environment possible. 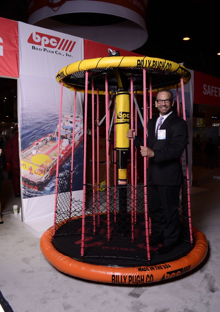