In the world of gCaptain coverage we tend to favor cutting edge technology over quality products that mariners have relied on for decades. But why? The truth is, we rely on old, tested technology aboard our own ships but write more frequently on new products just because they tend to be more interesting…. especially when they fail.

A case in point: gCaptain was on hand a few years ago to test a new system for personnel transfers aboard an oil rig. The FROG, a product by Reflex Marine, was a radically new design for lifting people aboard rigs via crane. The new idea was simple, have the men sit down and strap in while being lifted from crew-boats onto oil rigs. It was an idea that made sense to many safety-focused managers in Houston who were nervous about letting personnel ride transfer baskets standing up. The tests proved problematic. Those of us who participated in the test gave the unit a big thumbs down and we continued using our favorite product, the Billy Pugh, for all boat transfers.

The FROG failed to win our vote of confidence (In full disclosure the manufacturer claims an impressive track record), so gCaptain did not write about the product, but we also failed to share our endorsement of Billy Pugh because… well… it “just worked”.

In an interview with Billy Pugh CEO Paul Liberato, John Konrad found out what makes Billy Pugh the industry standard and how such a durable and well constructed product is designed and improved.

JK: I’ve heard many managers, primarily office types, say the Billy Pugh is not safe. But most guys on the rigs disagree. Why the discord?

PL: I believe that the answer is that it just “looks dangerous”. The guys offshore know different but hanging on to a personnel transfer device and using a crane to move from the boat to the offshore structure just “seems” like it shouldn’t be safe. Many of the “office types” you describe haven’t spent as much time on a rig or boat and if they have may have worked in an area that does few crane transfers. Another reason is that in normal man-riding situations, we are taught to tie off, snap in or buckle up. We are used to doors and windows around us, not riding on some kind of unusual looking rope device. The irony is that statistically, you are MUCH more likely to die in a helicopter transfer than a personnel net transfer. Most management personnel against crane transfers just choose not to pay attention to this fact. They believe that helicopters just have to be a safer method. In a “head-to-head apples-to-apples comparison” in an area that uses both methods regularly (like the Gulf of Mexico) this fact becomes very obvious. There have been dozens of fatalities in helicopter transfers in the last several years. There have been no fatalities on crane transfers in the Gulf over this same time period. A big push from our side of the industry has been to “professionalize” the crane transfer part of the equation. This would include dedicated clear deck landing area, a review of best equipment and better and more extensive training for anyone associated with the transfer of personnel via crane. You would never hover a helicopter over a stack of pipe (or whatever was blocking the deck) and have personnel jump off onto it but until recently this was pretty standard crane transfer procedure. We in the crane transfer industry have done a pretty good job of changing this paradigm. In recent years by adding this higher level of professionalism to the crane transfer equation, we are bringing this activity to an even higher level of safety for offshore personnel.

JK: The biggest critics of the Billy Pugh tend to be from European countries and during the Deepwater Horizon incident North Sea advocates were very critical of Transocean for not installing certain safety devices on their equipment, despite the fact these devices would not have worked in this particular case. Is there a difference between the European and American view of safety?

PL: The general U.S. offshore market view of personnel transfer via crane is that it is a safe method that includes risks that can be minimized by the proper equipment, training and procedures. Interestingly though, probably the two largest crane transfer projects in recent history were BP’s Thunderhorse and Shell’s Perdido. Obviously, these are both European companies but in both cases they chose our X-904 personnel transfer device to do massive numbers of offshore personnel transfers. BP had over 281,000 and Shell over 47,000 transfers during the height of operations. They were extremely successful and worked well in a variety of weather and sea states. In both cases there were no incidents.

JK: The critics say the Billy Pugh needs to be reinvented but the few new ideas gCaptain has tested, most notably the FROG, had significant safety problems. What will the Billy Pugh look like in 5 years? Will it be drastically different or incorporate smaller design improvements?

PL: Our most recent model, the X-904 really is the best of both worlds in terms of personnel transfer design. The devices you mention provide additional features that were not available on our regular personnel baskets such as outer protection, overhead protection and fallrestraint. The problem that we found in our research was that personnel did not like sitting or being quite so restrained. The X-904 provides the additional safety features asked for by oil contractor and operator management without sacrificing the benefits of traditional personnel net transfer that the offshore workers like; such as being able to stand and egress the device quickly and safely, basket 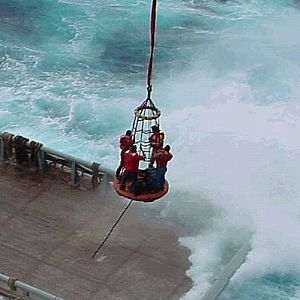 collapsing for storage, and less restraint for egress. Offshore crane transfers are a dynamic procedure and passengers need to stand using legs with bent knees, just as you would if you were riding a power boat in rough seas. Billy Pugh used to tell me when I first started with the company “don’t ever let them losetheir sea legs…keep um standing up”.

PL: We have definitely noticed an upswing in the commercial ship side of our business-tankers and lightering vessels especially. They have some unique challenges due to the dynamics of ship to ship transfer such as limited deck space, smaller cranes and the pitch and roll of two vessels next to each other. At the moment this industry is working on new guidelines, procedures and inspection programs for cranes and transfer devices alike to bring consistency and a higher level of safety to the transfer equation.

JK: I’ve witnessed the Billy Pugh take high levels of abuse and, in the hands of a skilled crane operator, complete transfers in fairly bad conditions. What is the secret to building a product with such durability?

PL: One of the many benefits of being in our business for over 50 years is that we understand the market that we serve. We make equipment almost exclusively for the offshore oil and gas industry. We understand the roughneck, the driller, the rigger and the derrickman as well as the culture of the offshore industry. These folks are tough and they are tough on equipment. When we build and design, we think more “tractor than sports car”. Our equipment is going to be treated rough and be exposed to rough seas, salt and sunlight…all of which are tough on gear. We understand this before we ever send anything offshore and build it with those factors in mind.

JK: How has your company been able to so effectively penetrate the global market?

PL: I think one of our biggest assets is our name. It is synonymous with offshore transfer devices and the offshore oil and gas industry in general. When I took over the company in 1989, one of the first things I thought to do was to change the name of the company. To put it mildly, BILLY PUGH was not the most glamorous or catchy marketing name that I could think of. After a very short amount of time though, it became very apparent that the name was extremely important and was one of our best assets. The fact that the offshore community may work all over the world but in real terms is a fairly small close knit group- really helps as well. Companies and rig hands are comfortable with our name and our equipment and this has helped us greatly to develop our overseas business and things have gone so globally. When something works in the Gulf of Mexico, it ought to work in Vietnam as well.

JK: What’s the next big idea for your company?

PL: Our addition of the X-904 wasa long process that took years to fully develop. It was a direct result of industry personnel telling us what they wanted and needed in a transfer device.We have always operated in this manner which is to say, we listen well. We don’t necessarily think we are the smartest or most creative/flashy folks here at Billy Pugh Co. but we do believe that we do the best job of listening to what the experts tell us. In my opinion, the experts are crane operators, HSE managers, rig managers and operations folks. They know what they need and we have found that if you build good relationships and listen to the people who know the world of offshore oil, then good things happen. Almost all our new products and ideas for new equipment have come from the industry asking us to solve aproblem for them. Sometimes it might be a specific accident or trend that a new product might help to reduce or eliminate. We really depend on the operators and contractors to guide us in what they need, we don’t much believe in “telling”them what they need. I’m sure that the next big idea will come as a result of this same process.